I posted an item on the life of Frances Elizabeth Kemp on my blog in January 2017. It was seen by Val, a great granddaughter of Frances. She has kindly supplied me with additional information and photos, which are included in the revised item below.

Alfred John Pinnuck married Harriett Elizabeth Loveday on February 17th 1899 at St Matthias Church, Stoke Newington in London. They had four children but the only one to survive past the age of one was Frances. Alfred was a carpenter. The 1891 census shows him at 3 Shakespeare Road, Stoke Newington, the same address as his sister Ellen. It must have been crowded as there were 4 adults and 7 children living there. Later in 1891, Alfred and Harriett moved to Lambeth where Frances was born on October 6th 1892. She had a twin brother, Matthew Luke, who died in 1893 aged 6 months.

Alfred’s sisters Ellen and Mary Anne also had several children who died young. Ellen had 12 children of which only 7 were alive in 1911. Mary Anne had 11 children of which only 6 were alive in 1911. Most of these child deaths occurred in the first year of life and probably reflect overcrowded housing conditions and poor sanitation. The number of deaths in this branch of the Pinnuck family far exceeds the average rate of infant mortality in England and Wales at that time, which was about 150 deaths per thousand live births.

Sadly Alfred died in 1897 aged only 24, when Frances was 5. The 1901 census shows Frances (aged 8) living in Stoke Newington at 2 Pellerin Road (a dairy) with her mother Harriett, aged 32, a dairy manageress. Harriett died in July 1901, making Frances into an orphan. She went to live with Sarah Sophia Paul nee Pinnuck (1854-1916), who was Alfred Pinnuck’s eldest sister. Records of St Mary’s National School, Hitchen (in Hertfordshire) show that Frances was at the school from September 1901 until May 1907, when she reached the normal age (14) to leave. Her address was The Highlander, 45 Tilehouse Street, Hitchen, which was a pub run by Luke Paul, Sarah’s husband. It still operates as a pub under the same name.

The grandmother of Frances was Frances Eleanor (aka Ellen) Pinnuck. She died on September 11th 1910 at 45 Tilehouse Street, Hitchen aged 86. Her death certificate says that she died of an acute intestinal obstruction. Frances Pinnuck, her granddaughter, is shown as the informant, who was present at the death. It seems that Frances was on a visit to Hitchen, as her address is given as 65 Byne Road, Sydenham.

The next record I have for Frances is the 1911 census where she is shown aged 18, living at 65 Byne Road, Sydenham at the house of her cousin Frances Elizabeth Weiste (37), the only child of Sarah and Luke Paul. Frances Elizabeth Paul had married Franz Friedrich Diedrich Weiste in 1899 and they had two daughters, Helena (b 1899) and Dorothea (b 1901). Diedrich is listed in 1911 as a rope turner, yarn and mat agent (employer). The house had 7 rooms, so apparently the Weiste family were comfortably off.

Frances later went to live in the house of John George Ernest Kemp, a hairdresser, in Camberwell. He had married Annie Mary Loveday, a sister of Frances’s mother Harriett, in 1893. Annie died in 1901 aged 28. The 1911 census shows John Kemp, a widower aged 39, living at 16 Waterloo Street, Camberwell with his sons George Henry Kemp (aged 17, a coffee porter) and Harold Jesse Kemp (aged 16, a printer).

Frances married George Henry Kemp (born November 16th 1893) on April 20th 1914 in Camberwell Register Office. They were first cousins as their mothers were sisters. Frances was 21, George was 20, a clerk. They later had two children, Elsie Lilian born in 1915 and Barbara Frances in 1917, both in Camberwell. According to family stories, George was in the army during World War One, but suffered from shell shock (now called PTSD or post-traumatic stress disorder) and was not the same man when he returned. 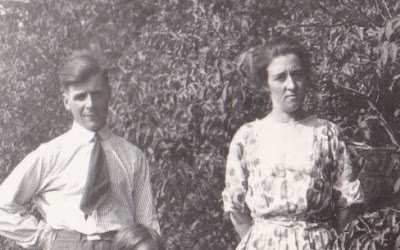 George’s brother Harold Jesse Kemp (1894-1969) had immigrated to Canada in 1913. George and Frances decided to do the same and Canadian Passenger Lists (on Ancestry) show George (26), Frances (27), Elsie (5) and Barbara (3) on board the SS Grampian from London, arriving at Montreal on 15 May 1920. George’s previous occupation is shown as “driver, mechanic and clerk” and his intended one was farming. Ancestry has the passenger declarations for George and Frances. They say that their destination was the Manitoba Agricultural College, Winnipeg and that their passage was paid by an Overseas Settlement Voucher. The Overseas Settlement Scheme was set up in 1919 to offer free passage to ex-service men, with their wives and children, to British colonies. It lasted until 1922 and 86,000 migrants were assisted, of which 26,560 went to Canada. 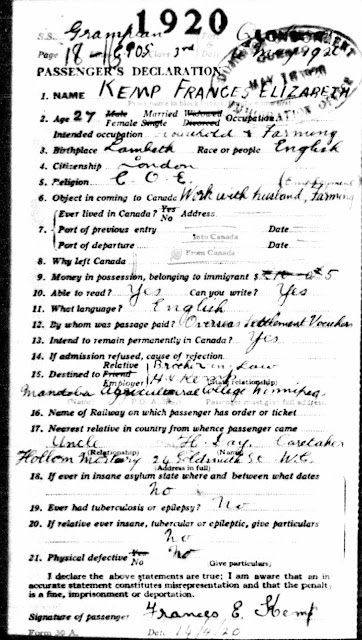 Passenger declaration completed by Frances in 1920

The 1921 Canada census shows George and Frances Kemp with their two children living in the house of John Grierson (aged 50), a farmer, in the rural municipality of Whitehead, Manitoba. This is a sparsely populated district of the Canadian prairies, about 140 miles west of Winnipeg. The nearest town is Brandon, 8 miles to the east. Here the winters are severe, with the daily mean temperature typically being -17 C in January, but the summers are warm. George was a city boy and found farming work hard. They had three more children namely Dorothy (b 1922), John “Jack” (b 1923) and Frank (b 1925). 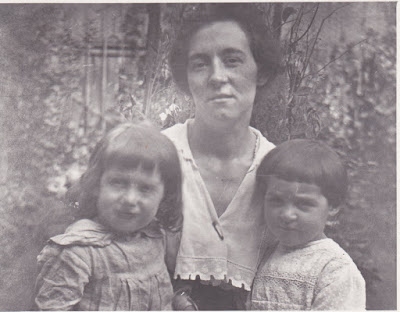 Frances with her daughters Elsie and Barbara

Sadly, Barbara Frances Kemp died in 1927 aged 10 in Alexander Manitoba, from complications due to diabetes. She was one of the first individuals to be given insulin developed by Canadian scientists Frederick Banting and Charles Best, but her symptoms were too severe for her to survive. The family then moved to Swift Current, Saskatchewan for George to work with his brother Harold Jesse Kemp. Harold had received a Bachelor of Science and Arts (BSA) degree in Agricultural Engineering and worked on the Experimental Station in Swift Current. Harold later invented several pieces of equipment for farmers.

Frances died in 1930 aged 38 from complications due to a miscarriage and is buried in Swift Current, Saskatchewan. Her daughter Elsie was then 15 years old and was needed at home to look after the smaller children.  She dropped out of school to do so. George eventually allowed his brother Harold and wife Eva to adopt the young boys.  George then married Alice Lydia Beresford and moved to British Columbia.  Soon afterwards, George, suffering from PTSD, left the family.  Elsie and Dorothy remained with their stepmother. 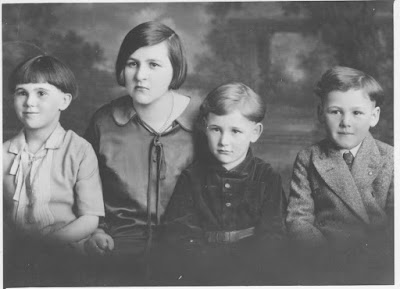 Dorothy, Elsie, Frank and Jack, after their mother died.

Unaware of what happened to George, it was assumed he had died.  Elsie eventually moved to Alberta and married Albert Joseph Wuttke (1894-1993).  They had two children.  Elsie died in 2005 aged 90. She is buried in Killam, a small town in Alberta, with her husband (there is a photo of the gravestone on the website Find A Grave).

Dorothy remained with her stepmother. She later married and started a family of her own, residing in British Columbia until her death in 1994.  They had 6 children.

Both Jack and Frank worked in the agricultural industry like their uncle Harold. Jack moved to New Brunswick to work on the Dominion Government Research Station. There he and his wife Gwen raised 4 children.  He passed away in the early 1990’s. Frank remained in Saskatchewan. He passed away in 1983 while living in British Columbia. 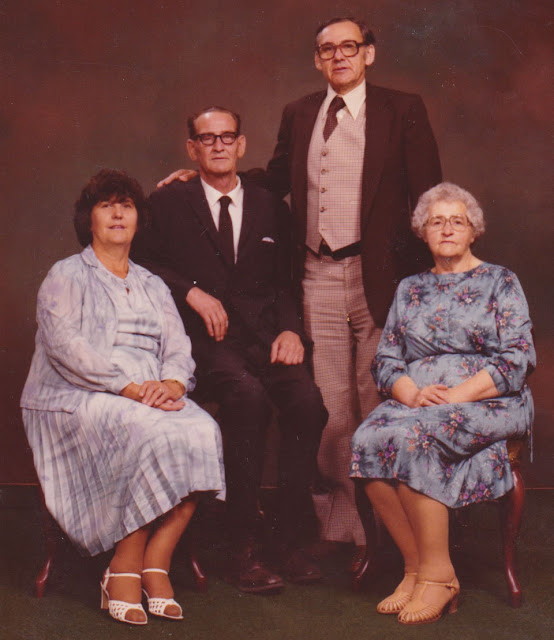 As previously stated, the children were led to believe that their father, George had died. But, in 1979, a UK solicitor found among the belongings of George’s brother Albert, who had recently passed away, information on a brother (Harold Jesse) in Canada. Harold had passed away in 1969 so the letter was forwarded to Jack advising him of the death.  Jack, Frank, Dorothy and Elsie were the only surviving family of the deceased brother.  It was at this point that they discovered that their father had returned to England and passed away in 1967.

A UK National Register was compiled in 1939. It shows George Kemp (born November 16th 1893, the date of birth of Frances's husband), a chemical and drug packer, living at 6 Beechwood Avenue, Orpington. This is a semi-detached house in a pleasant area on the edge of London. Also listed at the address was Louisa Kemp (born March 22nd 1895).
Posted by Phil Taylor at 02:15