My great uncle George Henry Armitage (1898-1936) played football for Charlton Athletic FC (see the item about his life on this blog). He was selected seven times to play for the England amateur team and once for the England professional team. I have donated one of his England amateur international caps, which was awarded for the match against Wales in the 1923-24 season, to the Charlton Athletic museum. They were pleased to receive it and tell me that they intend to display it at the museum. 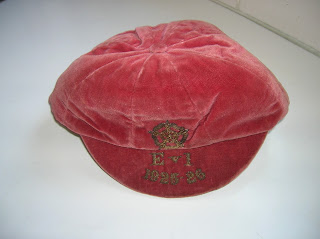 One of George's caps, similar to the one donated.
Posted by Phil Taylor at 13:33