Robert Melton Armitage was my great grandfather, the father of my grandmother Emma Ivall nee Armitage (1883-1970). He was the black sheep of our family !

Sometime before 1871, Robert joined the army. The 1871 census shows Robert aged 23, listed as a Gunner in the Royal Artillery at Woolwich.

Robert married Ellen Pinnuck on 30th September 1876 at the Parish Church of St Pancras in the County of Middlesex. The marriage certificate gives his age as 28 and Ellen’s as 20 years. He was a policeman and was living at the Hunter St Station. Her family came from Enfield, where she was born. One of the witnesses was Ellen’s sister Mary Ann.

The 1881 census shows them living at 34 Hatley Road, Islington and gives Robert’s occupation as a railway labourer. There are no children recorded in the household. Ellen’s sister Mary Ann, who had married James White in 1878 was living at 30 Hatley Rd with her husband James (24, a milk carrier), child Lilley (aged 1) and Ellen’s widowed mother Frances (57). Hatley Road is about 0.5 mile west of Finsbury Park Station. The houses at 34 and 30 Hatley Rd still exist – they are part of a modest two storey terrace. 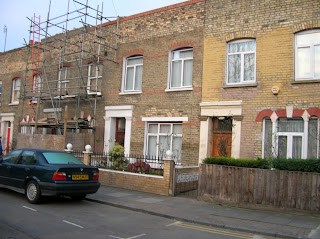 Robert and Ellen’s children Robert Melton (1881-1916), Emma (1883-1970), William Frederick (b1884) and Florence Edith (1887-1945) were all born in Islington. In 1885 the family were still living at 34 Hatley Road, Islington. This is the address given in the parish record of St Anne, Poole’s Park (a nearby church which was demolished in 1965) when Robert, Emma and William were baptized on 25 Mar 1885. Their father’s occupation was given as milk carrier. Robert and Ellen had a daughter, Maud Ellen in 1886 who died aged 15 weeks and was buried in Islington Cemetery in Finchley. Cemetery records give the child's abode as 34 Hatley Road. She was buried in a common grave - there are 25 other people in it.

Florence Edith and Gertrude Ellen were baptized at St Matthias Church, Stoke Newington on 10 October 1889. The register gives their address as 3 Shakespeare Road and Robert’s trade as milk carrier.

Electoral registers show that Robert moved to 70 Shakespeare Road, Stoke Newington in 1893. The 1901 census shows Robert (aged 53) living here with his wife Ellen (45) and children Emma (aged 17), Florence (13), Gertrude (11), Alfred (8) and George (3). Robert and William are not listed at this address because both were in the army. Shakespeare Road is classified as category 5 (out of 7) in the 1898-9 Booth poverty survey meaning “Fairly comfortable. Good ordinary earnings.” The road is now known as Shakespeare Walk. The houses (numbers 3 and 70) in the Southern end of the road where the Armitage family lived no longer exist, having been replaced with newer housing following bomb damage to the street during WW2.

The 1891 and 1901 census give Robert’s occupation as a milk carrier. In those times milk was delivered to houses via a milk churn. Milk was dispensed from it into suitable containers. It was therefore possible to illegally dilute the milk in the churn and so increase the profit for the milk carrier. My mother told me that Robert spent two spells in jail for doing this (although I have found no evidence to support the story) and that he was also frequently drunk, when he became violent. 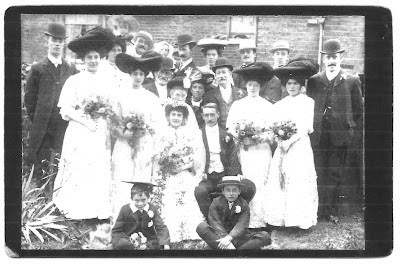 Wedding of Emma Armitage to George William Ivall in 1906

Robert and Ellen are in a group photo taken at the wedding of their daughter Emma in 1906 at St Matthias Church, Stoke Newington. The marriage certificate gives Robert’s occupation as milk carrier.

The death certificate of Robert Melton Armitage states that he died on 11 July 1910 aged 63 in Hackney from oxalic acid (used to clean milk churns) poisoning. An inquest held on 14th July 1910 at NE London Coroner’s Court decided that it was suicide. It must have been a painful death.

The following item appeared in the Hackney and Stoke Newington Recorder, 15 July 1910

A Stoke Newington jury returned a verdict yesterday of “Suicide during temporary insanity” at an inquest held at the Church Rooms by the Deputy Coroner Dr R.L.Guthrie, concerning the death of Robert Melton Armitage, aged 63, a milk carrier, of 70 Shakespeare Road.

The statements given in evidence by the various witnesses showed that for some time the deceased man had been suffering from intense bleeding at the nose and pains in the head. On Monday morning he left home at four o’clock to go to his work for Mr Jarvis of 877, High Road, Tottenham. He returned to dinner at two o’clock on that day and it was noticeable that he appeared to be in perfectly good spirits at the time. He made no complaint of any kind Mrs Armitage, his wife or to his daughter, who was at home at the time. Mrs and Miss Armitage left home at 2.50 to pay a visit to some friends. They returned at about 6.30 in the evening, and soon afterwards Miss Armitage and the deceased’s daughter-in-law went out into the yard at the back where they found a tumbler coated with crystals. They afterwards went upstairs and found the deceased lying, undressed, dead on the bed. Dr Samuel Matthewson of 12 Allen Road was at once called in, but upon examination could do no more than to pronounce that life was extinct, death being due to oxalic acid poisoning.

The Coroner’s Officer, PS Self, informed the Coroner and the jury that he had made inquiries, among other places, of the firm by whom the deceased had been employed. The manager there gave Armitage a splendid character as a hard-working man and said that the firm were very sorry indeed to lose him. On Monday, however, he did not return with his barrow as usual, but send a boy back with it, and no more was heard of him until they were informed of his death. He (the Sergeant) had also ascertained that on Sunday at 1.30, the deceased went into the “Stack Rock” beerhouse, Allen Road, where he called for a glass of beer. He professed dissatisfaction, not with the beer, but with the glass into which it had been served and the proprietor, Mr Raymond Leggett, changed the glasses twice to “humour” the deceased who finally said that the third glass with which he was served would do.

Ellen, Robert’s wife, died three years later in 1913, aged 57. She was buried in Abney Park Cemetery, Stoke Newington. The section of the cemetery where she is located is overgrown and I have not found a headstone with her name on it. The grave of William Booth, founder of the Salvation Army, is nearby.