William Armitage was an elder brother of Robert Melton Armitage (1846-1910), my great grandfather.

William was born 1841 in Leeds, the third of five boys born to Thomas Armitage (a linen maker) and his wife Elizabeth (nee Woodward), who died about 1850. The 1851 census shows Thomas Armitage, a widower aged 46, living at 4 Pendulum Street, Leeds with his sons William (aged 9), Joseph (6) and Robert (3).

William joined the army on 27 June 1861 in Leeds. He gave his age as 20 years and his previous occupation as miner. He was unmarried, height 5 foot 7 inches, 157 lbs, with brown hair and tattoos on both arms. He enlisted for 12 years for a bounty of one pound, joining the Royal Artillery. The signature box on the enlistment form contains “the mark of William Armitage“, indicating that he was illiterate. William was in the UK until 11 July 1862 when he was posted to India, where he served until 5 Aug 1867. The Indian Army was formed by the British Government after the Indian Mutiny in 1857 (before then the British East India Company had its own army units). The Indian Army was used to suppress uprisings, keep order and guard the frontiers. It included British and Indian (sepoy) units.

On his return to the UK, William was posted to Woolwich then Dover where he married Kate Marton (born 1847 in Pimlico, Middlesex) on 23 September 1869. He was aged 28 and she 22. They went on to have six children namely Robert Henry (b 1870 in Dover), Thomas William (b 1871 in Limerick), Robert Melton (b 1874 in Woolwich), Ellen Elizabeth (b 1878 in Colchester), John James (b 1881 in Colchester) and Joseph Edward (b 1883 in Battersea). The places of birth of his first five children show where William was posted.

Thomas William Armitage was baptised in 1873 and Robert Melton in 1874, both at St Mary Magdalene church in Woolwich. Their father William is listed in the baptism record as a Gunner, 17 Brigade, Royal Artillery.

The 1881 census shows William (aged 40, a soldier), Kate (33), Robert Henry (9), Thomas William (7), Robert Melton (6) and Ellen (2) Armitage living at Artillery Barracks, St Giles, Colchester. William’s occupation is given as “Gunner, Royal Artillery” on the birth certificate of his son John James in May 1881.

In 1881, Egyptian army officers led by Ahmed Arabi mutinied against the Khedive of Egypt and forced him to appoint a nationalist government. In January 1882  Arabi became Minister of War and demanded that foreigners be driven out of Egypt. Britain was concerned about access to the Suez Canal and their investments in Egypt. This prompted an armed British response, first in the form of a naval bombardment of Alexandria, and then an expeditionary force under Lieutenant-General Garnet Wolseley. William Armitage was part of the 24,000 strong army sent from Britain. He arrived in Egypt on 8 August 1882. At dawn on 13 September 1882, the British Army led by the Highland Brigade attacked Egyptian forces commanded by Arabi and entrenched in fortifications at Tel-el-Kebir, sixty miles east of Cairo. The British assault was accompanied by the sound of bagpipe players. The Egyptian army collapsed after an hour's fighting. Soon afterwards Arabi was captured and the war was won. William returned to the UK on 19 October 1882 having spent 73 days in Egypt. He later received the Egyptian Medal with Clasp for Tel-el-Kebir

The Battle of Tel-el-Kebir was celebrated by the notable (!) poet William McGonagall. His poem begins :

Ye sons of Great Britain, come join with me,
And sing in praise of Sir Garnet Wolseley;
Sound drums and trumpets cheerfully,
For he has acted most heroically.

William was discharged from the army on 3 July 1883 aged 42 on termination of his second period of engagement. His total service was 22 years 5 days. His army record states his character on being discharged as very good.

The record for the baptism of Joseph Edward Armitage at All Saints, Battersea lists William as a labourer living at 24B Victoria Dwellings.

By 1901, William (aged 60) and Kate (54) were living at North Lodge, Kensington Palace Gardens. Also in the household were their children Ellen (22, a dressmaker) and Joseph (17, an apprentice) as well as Annie Armitage (24), the wife of their son Robert Melton (who was in the British Army fighting the second Boer War in South Africa) and her son Henry Maclachlan (aged 1). William was a gatekeeper at Kensington Palace. 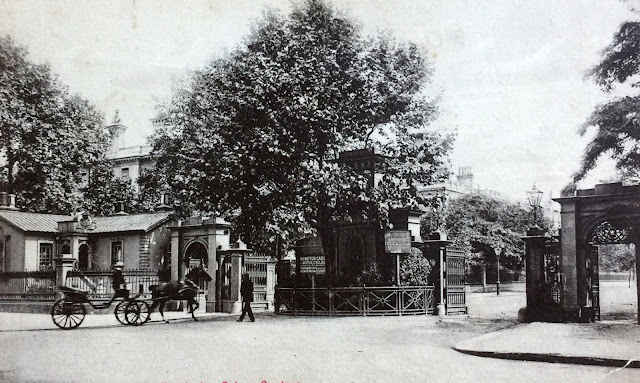 William in his gatekeeper's uniform

William's wife Kate died on February 25th 1911 aged 63. Probate records show that she left no will, but that administration of her estate (worth £436) was granted to William.

In the 1911 census William (aged 71) was still a gatekeeper living at North Lodge, Kensington Palace Gardens. He is listed as a widower. Also at the address were his daughter Ellen (32, a dressmaker) and grandchildren Henry (11) and Ellena (6). These were children of William’s son Robert who was in the army and whose wife Annie had died. He lived there until 1918.
The 1921 census shows William (79, a retired gatekeeper) living in 2 rooms at 35 Clanricarde Gardens, Kensington with his daughter Ellen (43, needleworker at home). He later moved to 21 Campden Street, Kensington, where he lived with his daughter Ellen until his death.

William died on 7 July 1926 in Kensington aged 85. He is buried in grave 48425, Kensal Green Cemetery. There is a separate item on this blog that contains photos of his grave.
Posted by Phil Taylor at 10:08

Email ThisBlogThis!Share to TwitterShare to FacebookShare to Pinterest
Labels: Children of Thomas Armitage (b 1803), William Armitage (1841-1926)