Alfred (aged 13) is in a group photo taken at the wedding of his sister Emma in 1906. He doesn’t seem to have had an easy childhood. Robert Melton Armitage (Alfred’s father) spent time in jail for watering the milk and was violent when drunk. He committed suicide in 1910 at 70 Shakespeare Road by drinking poison when Alfred was 17.

In 1911 Alfred aged 18, a stoker at a laundry, was living at 4 Oldfield Rd, Stoke Newington with his mother Ellen Armitage (56) and siblings Florence (23), Gertrude (22) and George (13). The accommodation consisted of only 3 rooms, so it must have been crowded ! Alfred’s mother died in 1913. Railway employment records show that Alfred started work with the London & North Western Company on 6th March 1913.

Alfred resigned from his job on the railways on 11th June 1915, presumably to volunteer (conscription was not introduced until 1916) to fight in the war. The medal rolls show an A J Armitage who was initially a Gunner in the Royal Field Artillery and later a Sapper in the Royal Engineers and received the 1915 Star, a campaign medal given to those who fought that year. Alfred rejoined the London & North Western railway company on 3rd May 1919. This became part of the London, Midland and Scottish (LMS) railway company that was formed in 1923.
The 1921 census shows Alfred (aged 28, a railway goods guard with the North London Railway Company), his wife Ethel (29) and children Leonard (1) and Robert (1) living in two rooms at 19 Sandbrook Road. Their two elder sons Leslie and Alfred are not listed with them and I can't find them in the census index.

The birth certificate of their youngest child Stanley in 1925 gives Alfred’s occupation as railway guard. Alfred worked on the railway for 44 years, most of that time as a passenger guard based at Broad Street on the North London route, working out to Richmond, and Watford mostly. A passenger guard was nominally 'in charge' of the train and its passengers, and would also oversee any parcels or mail being conveyed. They would often pick up and put down many items from any station they called at and were responsible for ensuring that these were put out at the correct stop. They were also responsible for seeing passengers on and off the train and ensuring all doors were secure before signalling to the driver to proceed. In Alfred’s day this was always done by giving a blast on their silver (Acme Thunderer) pocket whistle, followed by displaying a green flag held steadily above the head (a green shaded oil lamp at night). This done, they would quickly step back into the guard’s compartment as the train moved off.

In 1926, Alfred and his family moved to 207 Samuel Lewis Trust Buildings, Dalston Lane, Hackney. Samuel Lewis was a money lender who died in 1901 and left a large sum to set up a charitable trust to provide housing for the poor. Several large properties were built, including the one in Dalston Lane, which was completed in 1923. Alfred lived at number 207 until 1934, when he moved to number 202 where he lived until at least 1939. The national register compiled in September that year shows Alfred (a railway guard, LMS) and Ethel living at 202 Lewis Trust Buildings.

Electoral registers indicate that sometime between 1939 and 1945 Alfred and his family moved back to Sandbrook Road, this time to number 17. Stoke Newington was extensively damaged by bombs during WW2. Many houses in the area were completely destroyed, although 17 Sandbrook Road suffered only minor blast damage. A V1 bomb fell nearby in Londesborough Road. In 1945 Alfred was living with Ethel and his sons Robert and Leonard. The 1947 to 1953 registers list Alfred and Ethel, Leonard and his wife Ivy, Stanley and his wife Rose at number 17. Stanley and Rose had moved out by 1955. Leonard and Ivy had gone by 1957. 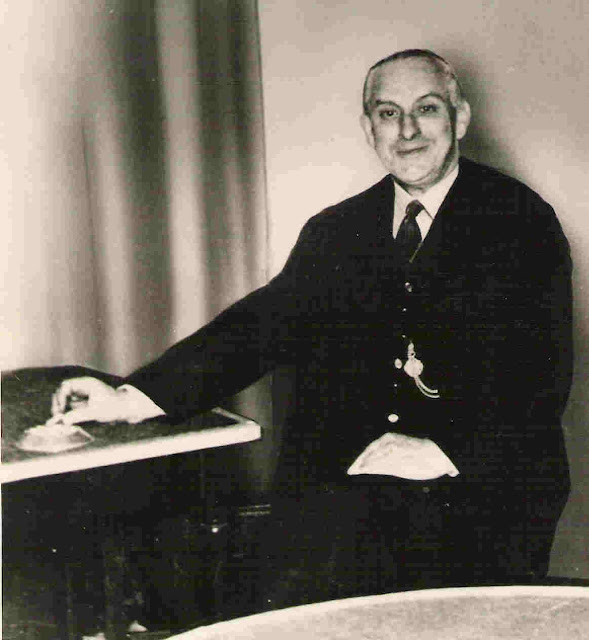 Alfred’s daughter-in-law Eileen (wife of his son Robert) remembers him as a very likeable person. She recalls Alfred coming home from work when he would unclip his starched work collar and tie and hang them up on a hook in the kitchen. He would often take his false teeth out, much to the annoyance of his wife!

Alfred was ill in 1956 and during the early summer of 1957 attended the Railway Convalescent home in Torquay. It is believed while there he suffered from sunstroke as he came back very red and sunburnt. After he came back he had changed completely. He hardly spoke a word and it was as if he was looking straight through you. One day he went out for a walk and collapsed on a bench in Clissold Park. He died soon afterwards (in 1957) aged 64.

His wife Ethel moved away from Sandbrook Road in the early seventies to sheltered housing in Dunstable, near her son Alfred. She died there in 1986 aged 96.
Posted by Phil Taylor at 11:40