Gertrude Armitage (known to me as Auntie Gert) was a sister of my grandmother, Emma Armitage.

Gertrude was born on 22 February 1889 in Stoke Newington (in North London), a child of Robert Melton Armitage (1846 - 1910) and Ellen Armitage nee Pinnuck (1855 - 1913). Robert and Ellen had twelve children, although five on them died when young. Gertrude was baptised in October 1889 at St Matthias Church, Stoke Newington. The church had been built in 1851-3 and was badly damaged by a bomb in 1941. It was repaired, reopened in 1954 and is still used as a church. The baptism register gives the Armitage’s address as 3 Shakespeare Road and Robert’s trade as milk carrier.

In 1901 the census return lists the household as Robert (aged 53, still a milk carrier), Ellen (45), Emma (17), Florence (13), Gertrude (11), Alfred (8), George (3). They were living at 70 Shakespeare Road, Stoke Newington. Percy Armitage is not listed because he died in 1892. Emma’s brothers Robert and William had left home by 1901. The southern section of Shakespeare Road that contained numbers 3 and 70 was damaged by bombing during the second world war and the houses there were subsequently demolished. Newer housing now stands on the site.

In 1906, Gertrude was a bridesmaid at the marriage of her sister Emma to George William Ivall, at St Matthias Church in Stoke Newington. A wedding photo shows Gertrude and the other 3 bridesmaids wearing impressive hats!

Gertrude probably didn’t have had an easy childhood. Her father spent time in jail for watering the milk and was violent when drunk. He committed suicide in 1910 at 70 Shakespeare Road by drinking poison, when Gertrude was 21.

In March 1911 Gertrude aged 22, was living at 4 Oldfield Rd, Stoke Newington with her mother Ellen Armitage (56) and siblings Emma (27), Florence (23), Alfred (18), George (13) and Emma’s daughter Florence (2). The accommodation consisted of only 3 rooms, so it must have been crowded! Gertrude’s occupation is given as an artist with a fine art publisher.

Gertrude married Henry Charles Bull in April 1911 at St Jude’s, Islington. She was 22, he was 24, a warehouseman. Henry’s father (also called Henry) was an upholsterer with his own business, who lived at 64 Mildmay Road, Islington, which is near where Gertrude lived. The witnesses were her sister Emma and brother Robert. Gertrude was pregnant when they married, her first child Hilda Gertrude being born in July 1911. Gertrude and Henry (known as Harry) had two more children Allan George (b1913) and Phyllis Irene (b1914).

Gertrude’s mother Ellen died in 1913 and was buried in Abney Park Cemetery (near Stoke Newington). 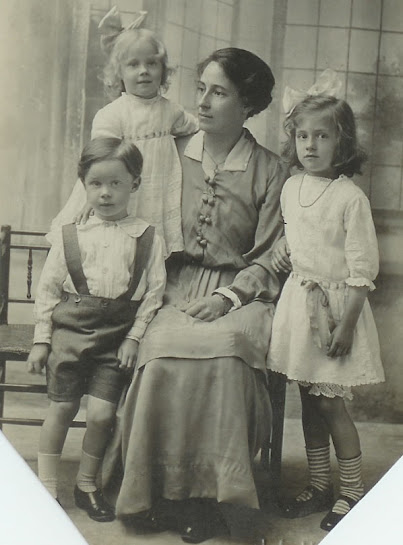 Gertrude with her children Allan, Phyllis and Hilda c 1917

Harry was a Gunner in the Royal Field Artillery during World War 1. He was a leading horseman on the large artillery guns (which were moved using horses). The campaign medals awarded to Henry indicate that he did not join the army until 1916 (when conscription was introduced). Gertrude had a hard life bringing up 3 children alone while Harry was away. The family lived at 32 Scarborough Road, Leytonstone, London E11.
The 1921 census shows Henry (aged 34), Gertrude (32), Hilda (9), Allan (7) and Phyllis (6) living in 5 rooms at 32 Scarborough Road. Henry was a commercial travellor for Matthews & Clark Ltd, Furniture Manufacturers, 340/2 Old Street, London EC2.
Around 1935, the family moved to 13 Brook Road, Chigwell, Essex. The 1939 register shows Harry (a commercial traveller selling furniture and general woodwork) and Gertrude living at 13 Brook Road, with their children Allan (a commercial traveller selling soap, fragrance and toilet products) and Phyllis (a short hand typist working for the railway). Their daughter Hilda (a short hand typist) was living at Boldner, Forty Green, Amersham in the household of Henry C Strickland (born 1873, a master nurseryman and market gardener).

Harry spent most of his working life as a sales representative, selling to furniture shops and became well known in the furniture trade. In 1953 he was working for Thomas Glenister Temple Works, High Wycombe. His grandson Jeffery Gibson remembers visiting the factory with him in 1953, when they were making stools for the coronation. 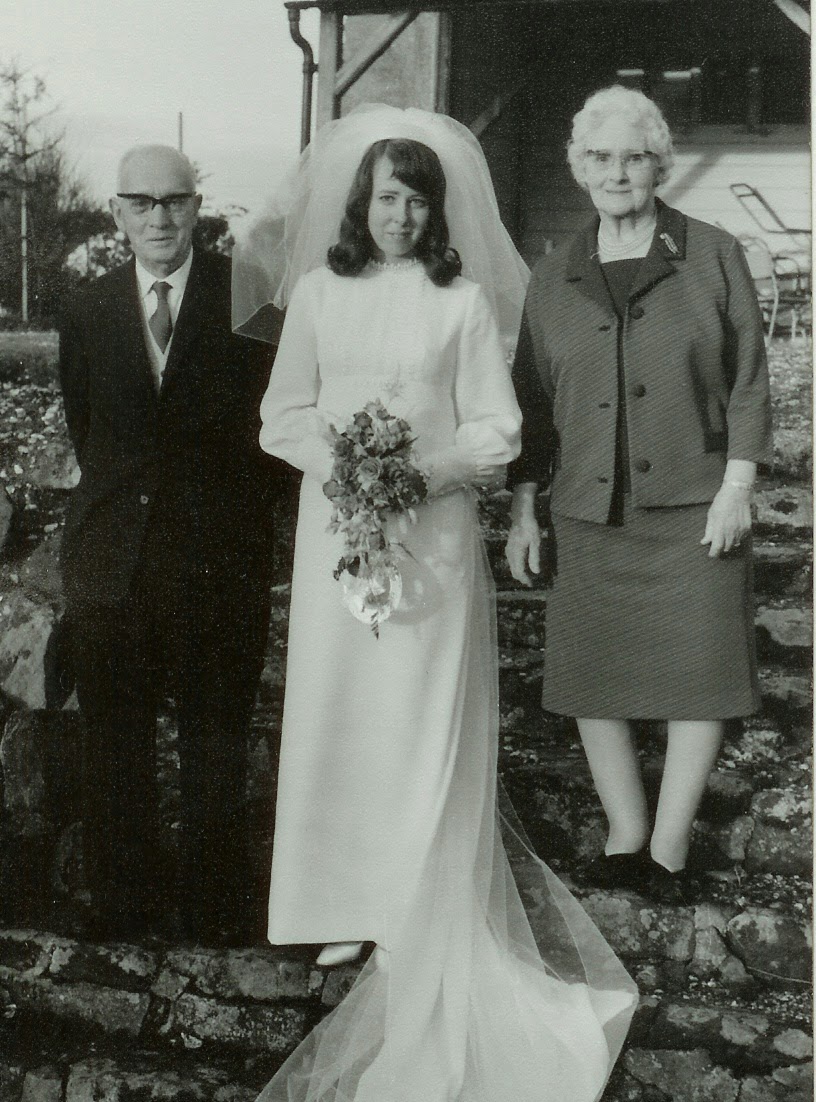 Gert and Harry with their grand daughter Angela in 1969

I remember Gert and Harry coming to visit my grandmother Emma when she lived with my parents in the 1960s. Gert walked awkwardly but otherwise seemed fairly fit and lively, although in her 70s.

In 1968, Gert and Harry moved from Chigwell to Tenterden (40 Knockwood Rd) in Kent where her daughter Phyllis lived (at 14 Homewood Rd, with her husband Denis). Harry died in 1971 aged 84 and Gert died in 1978 aged 89. She was cremated at Charing Crematorium in Kent.
Posted by Phil Taylor at 08:05