Alfred was born on 16 March 1918 in Brentford, the second of six children (five boys and one girl who died aged 1) born to Alfred John Armitage and his wife Ethel Emily. Their other children were Leslie John (1915-86), Leonard Frank (1920-2004), Robert Melton (1920-93), Betty M (1922-24) and Stanley Thomas (1925-94). Electoral registers show the family living at 19 Sandbrook Road, Stoke Newington (North London) in 1919 and 1925 In 1926, Alfred’s family moved to 207 Samuel Lewis Trust Buildings, Dalston Lane, Hackney. They lived at number 207 until 1934, when they moved to number 202.
In 1938, Alfred married Vivian Violet Wills. They were both aged 20. The 1939 Register shows the couple living at 5 Lansdown Drive, Hackney. Alfred had joined the London Midland and Scottish Railway in 1938 and was working as signalman when he enlisted voluntarily in the Army soon after the outbreak of World War 2 in 1939. He served in Military Transportation units at home and abroad.
It seems that Alfred and Violet's marriage had ended by 1946, as Alfred married Edith Daphne Katherine (known as Kay) Babington in Staines that year. Their first child (a son) was born 1947 in Thanet. They later moved to Watford where two more children (a son and a daughter) were born in 1949 and 51.

Alfred returned to work on the railways in 1947. After a period of training in several signal boxes he was appointed District Relief Signalman Class 1 in February 1950. A Relief Signalman would take over from the normal signalman if he was not available for work.

On 8th October 1952 there was a major train crash at Harrow and Wealdstone Station. Alfred started work in the Harrow No 1 signal box at 6am that day. It was foggy but had begun to clear by 8am. Alfred switched the points to allow a local train travelling from Tring to Euston to stop at Harrow and Wealdstone station. At 8.19am, whilst the local train was in the station, it was struck heavily at the rear by an express train from Perth moving at 50-60 mph. The resulting wreckage spread across the tracks and was hit by another express train at 60 mph. 112 people died in the crash and 157 had injuries that required hospital treatment.

The Ministry of Transport appointed an Inspector to conduct a public inquiry to establish the reason for crash. Newspapers reported on the inquiry. 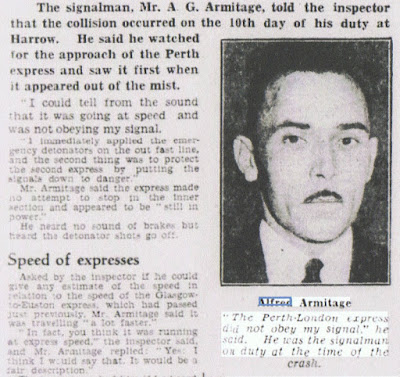 The Inspector in his report dated 12 June 1953, stated in the conclusions
“Generally, Armitage appeared to be an able relief signalman who was thoroughly conversant with the working at Harrow, and his record is very good. I can find no evidence to show that he failed in any way to comply with the regulations in his signalling of the local and Perth trains, and the state of shock in which he was found should not be held against him. In view of his temperament, which was described as sensitive – and I had the same impression at my Inquiry – I can well understand his reaction to the disaster which had taken place under his eyes…..I consider, therefore, that he should be exonerated from all responsibility for the accident.”
The report concluded that the accident was caused by the Perth train not stopping at danger signals, as it should have done (the driver of this train was killed in the crash).

Another one of my relations, Daniel Durnford Ivall, who was Assistant Chief Officer in the Middlesex Fire Brigade, played a leading role in the rescue following the Harrow Train Crash and was awarded an OBE in 1953 for his work.

Reorganisation within BR led to the abolition of station masters at local stations. Around this time Alfred left the railway and became a pub landlord at the Red Lion in Dunstable. He later became a school caretaker. He died 1991 in Luton aged 73.
Posted by Phil Taylor at 11:46