John James Armitage was a son of William Armitage (1841-1926), who was an elder brother of my great grandfather Robert Melton Armitage (1846-1910). This profile contains information and photos from John’s son, Patrick and his granddaughter Joanna.

William (b 1841 in Leeds) and Kate (b 1847 in Pimlico, Middlesex) Armitage had five sons and one daughter. John James was the fourth son, born on 8 May 1881 in Colchester. William served as a Gunner in the Royal Artillery between 1861 and 1883. He was stationed at Colchester when John was born. John was baptised in the Garrison Church at Shorncliffe (an army base near Dover) on 14 August 1881.

In the 1891 census William Armitage’s age is given as 48 and his occupation as messenger at the Office of Works. He was living at 17 Chatham Street, Battersea with his wife Kate (aged 44) and their children Thomas (19, a tailor’s porter), Ellen (12), John James (9) and Joseph (7).

John followed his father and his elder brother Robert into the army. He joined the Royal Field Artillery on 24 January 1900 when aged 18, in Gosport. His army record is in the National Archives at Kew. His enlistment papers say he had blue eyes, black hair, height 5’9” and his previous occupation was a porter. His next of kin is given as his sister Miss Nellie (ie Ellen) Armitage, North Lodge, Kensington Palace Gardens (where she was living with her parents, William and Kate).

The 1901 census shows John, aged 20, at Shorncliffe Army Camp, Folkestone. In April 1902 John was sent to South Africa. The Boer War ended in May 1902, but there was a need for an army presence to maintain British control. He stayed there until 1907 when he was sent to India, arriving in Bombay November 1907, returning to Britain in March 1909. The 1911 census records John Armitage aged 29 as a Corporal 114th Battery RFA at Butt Road, Colchester. 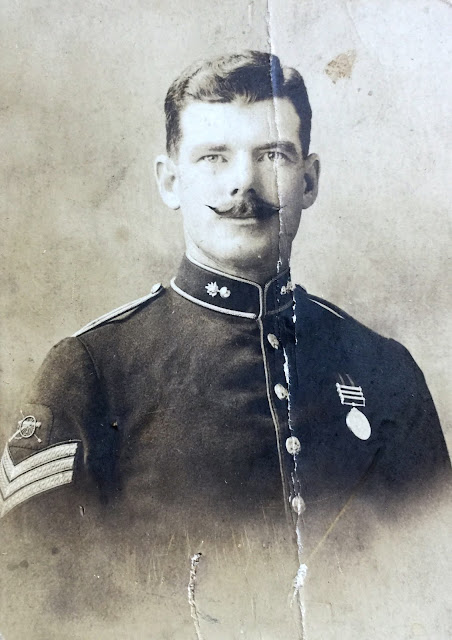 John married Clara Margaret Moss on 29 September 1913 at St James Catholic Church in Priory Street, Colchester. He was aged 32 and she was 22.

John’s occupation is given as a Sergeant in the 115th Battery, Royal Field Artillery and his address as Artillery Barracks, Colchester. Clara was a tailoress, the daughter of the Warden of the Cavalry Barracks in Colchester. They had three children: Clara Margaret (born 25 November 1914), John William (born 19 Jun 1916) and Patrick James (born in 1926). 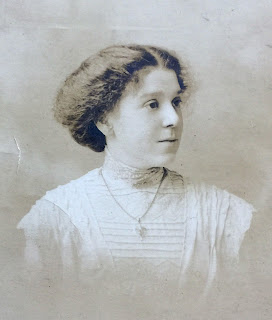 Britain declared war on Germany on 4 August 1914. John embarked for France, as part of the British Expeditionary Force, on 16 Aug 1914. He was in the 25th Brigade of the Royal Field Artillery. British forces took a leading role in the First Battle of Ypres (October-November 1914) and sustained heavy casualties. John was promoted to Battery Sergeant Major on 8 December 1914. He was awarded the Distinguished Conduct Medal (an award given to Non Commissioned Officers and other ranks) on 25 May 1915. The London Gazette dated 5th August 1915 contains the following citation:
“12835 Battery Sergeant Major Armitage J, 458th Battery, Royal Field Artillery. For conspicuous gallantry, ability and resource throughout the operations from 18th April to the 16th May 1915, around Ypres. He invariably showed exceptional courage and coolness under fire. On one or two occasions of unusual emergency he acted with great ability and judgement, and rendered invaluable service.”

John was promoted to 2nd Lieutenant on 19 May 1915. In March 1916 he came under heavy shell fire at an observation post, which gave rise to what is described in his army record as “neurasthenia”. This term (no longer used) meant a condition of nervous exhaustion in which, although the patient suffers from no definite disease, he becomes incapable of sustained exertion. John was declared unfit for service between May and August 1916 and was treated at a hospital on the Isle of Wight. He later returned to the Western Front and was injured in the left shoulder by a shell fragment on 30 June 1917, which resulted in 3 weeks sick leave from 1 to 21 July 1917 in Colchester. He was promoted to Lieutenant on 1 July 1917. John was sent to Italy on 25 January 1918 to help the Italian army (who were fighting against Austria) with anti aircraft gunnery. He served there until 1 May 1919. 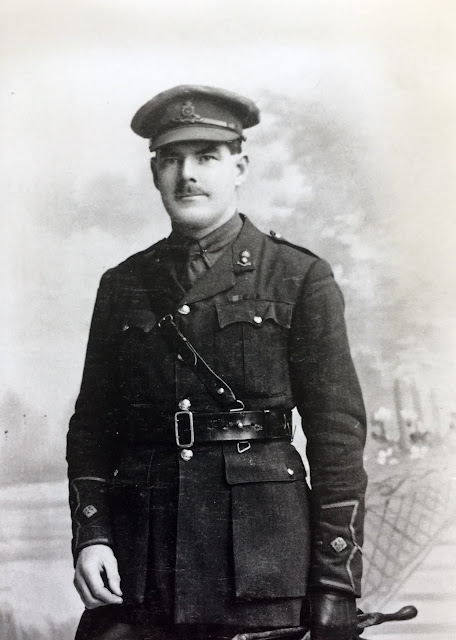 John in his officer's uniform

In addition to his DCM, John was “Mentioned in Despatches” three times. These were announced in London Gazette issues dated May 1915, 7 January 1919 and 6 June 1919. A certificate was awarded to a man mentioned in despatches, which noted his service details along with a reference to the specific despatch in which he was named. In addition, during the First World War an emblem of bronze oak leaves - which signified that the medal recipient had received a 'MiD' - was also worn on the ribbon of the Victory Campaign Medal.

John’s army file contains a disability report dated 20 April 1919. It says that he suffered from tremors of the tongue and fingers, was easily excited and had a rapid heartbeat. It assessed John as 30% disabled. However, a Medical Board on 29 September 1920 stated his heart and lungs were normal and had nil degree of disablement. John was granted the rank of Captain on his retirement from the army on 4 November 1920, when aged 39.
The 1921 census shows John (aged 40, a Captain in the Royal Field Artillery) his wife Clara (29) and children Clara (6) and John (4) Armitage as visitors at an address in Walton-on-the-Naze, Essex. This is a seaside town, other visitors are listed and the census was taken in June, so it seems likely that John and his family were on holiday, staying in a boarding house. John's address on 8 August 1921 was 68 Roman Road, Colchester. 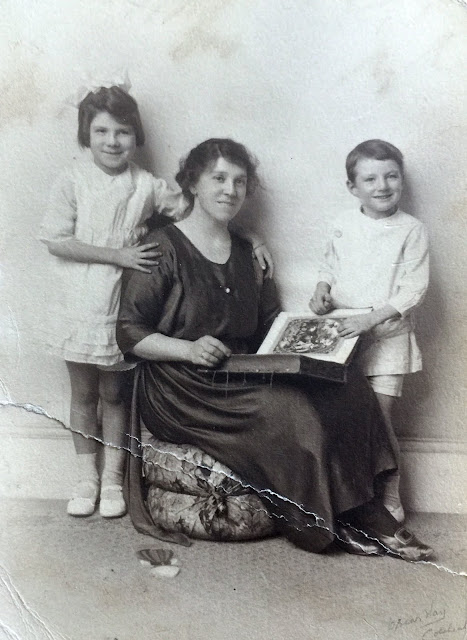 After he left the army, John got a job as a representative of the Colchester Brewing Company. He co-founded the West Mercia Bus Company but this was not successful. He later met Patrick Sandeman, who he had known as a subaltern in World War 1. Patrick, who was part of the family who owned the Sandeman port and sherry company, offered John a job as a sales representative in Worcester. John accepted and worked for the company until he retired.

John and his family moved back to Colchester in about 1935. In 1936, John was acquitted of drunk driving. A newspaper report on the case is shown below.

John is listed in the 1939 national register as a wine shipper's manager living at 8 Old Heath Road, Colchester with his wife Clara and daughter Clara (shown as "incapacitated"). The health of John’s daughter, was damaged by meningitis when she was young. She lived with her parents until 1943 when she died aged 28 of pneumonia.

John retired in 1952, aged 71. He had good health during most of his life but developed throat cancer and died at Essex County Hospital, Colchester on 3 December 1953 aged 72. John was cremated at Ipswich Crematorium on 7 December after a funeral service there. His ashes were scattered in the Garden of Rest.